Having spent almost 30 years as a surgical assistant, there was little I thought I haven’t seen in an operating room. That thought, and my own impression of mankind changed in February 2017. 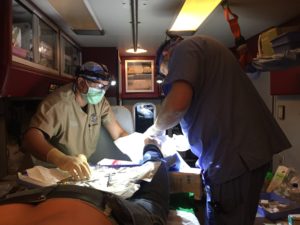 Training as an assistant in the Tidewater, VA area where Operation Smile was founded, I had always wanted to become involved with an overseas medical mission trip. Work, family and finances seemed to be the key contributors to not fulfilling this bucket list item. Also, even when I really thought I could work everything out, I was not able to identify with a medical mission that I thought would fully utilize my career skills as a surgical assistant.

Meeting Dr. Geelhoed at the ACS Clinical Congress was the search engine I had been looking for. Partnering with longtime friend,coworker and fellow surgical assistant Dan Baird, we set out plans to spend a few weeks with Mission to Heal’s Philippine Medical Mission Trip. This experience turned out to be truly one of the greatest joys of my life.

Though challenging and broadening in many ways, it provided the perfect environment and opportunity for life changing growth. I absorbed and embraced each moment the best I could and was honored to be half way around the world in the Philippines. 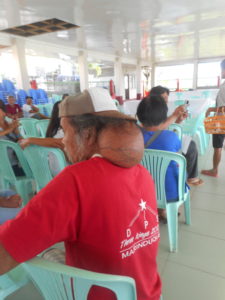 This mission trip has been a very good learning and humbling experience for me. As this is my first mission trip, I was anxious as to what I could do. Meeting up with the team in Manila fostered the beginnings of multiple beautiful relationships with individuals from all over the world, all sharing in the global healthcare community. Physicians, Medical Students, Nurses, Surgical Techs, and some folks who just wanted to help in any way they could. We all became very familiar with each other as we traveled several hours at a time in 2 small passenger vans to some of the most remote islands of the Philippines.

Once we arrived at our first location, in the town of Santa Cruz on the island of Marinduque, it seemed like we were a well-oiled machine; triage was set up, the Mobile Surgical Unit was prepared, a makeshift Pharmacy created, and a patient staging area was established. We began attending to patients almost immediately. 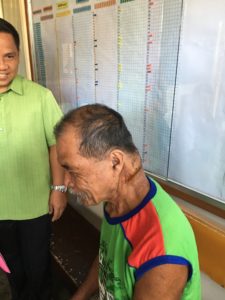 It is often said that the last thing that you see is often the thing that you remember the most. Not on this trip. Our first patient was a local 46 yr. old man who looked a lot older than he was. He showed up with a Cantaloupe sized mass on the back of his neck that he said had been there for over 8 years. He had let his hair grow long to try and conceal its appearance, but it had gotten so large and dense that its weight was stretching his face backward so much that his left eye was forced closed.

For years he had worked in the fields and only came into town occasionally, due to his appearance. Dr. Jun Garcia and I removed this lipoma, and some extra skin from his neck and I tried to do our best to minimize a scar. The patient was a trooper, never flinching a bit and our only anesthesia was a Xylocaine injection. Given my first impression of him, I felt sure that his incision was going to become infected, laying underneath his oily locks of grey hair.

The team performed an additional 43 operations that first day. The next morning as we began to setup again, Patient 1 returned for a dressing change. He had gotten a haircut, was clean shaven, and looked like a million bucks! You could see a new look on life in his face. He was extremely appreciative of what we had done for him, and he didn’t just walk away after his dressing change. He voluntarily walked over to the entrance to the triage area and helped instruct the other local patients as to where they need to go for evaluations. He was now the Man of the Town. 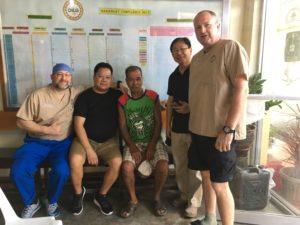 These people are survivors, living off the land, not dependent on government assistance, all the while compassionate and friendly to everyone. Now this trip was planned well in advance, back sometime in mid-2016. What wasn’t planned was Typhoon Nina that struck Santa Cruz dead on the day after Christmas, just 5 weeks before our visit. It seemed that even with all the devastation, these people seemed unfazed. Truly a remarkable trait that I wish I had.

Between our week in Marinduque and another week on the island of Mindoro, Mission to Heal performed over 250 surgeries, most of which were performed in the Mobile Surgical Unit. This was my first mission trip and it was truly a great experience. The time we had as an entire mission team was great as we enjoyed the beautiful landscape of the Philippines, as well as the impeccable hospitality of the local communities. I encourage everyone who is able to join the mission trip regardless of your age and circumstances. I am already looking forward to my next overseas medical mission trip.