M2H Documentary: We Are the Ones

We are always excited about new ways to share the Mission to Heal story, and today we want to highlight one retelling from our friends at Pendragwn Productions. They are an independent multimedia production team who followed M2H founder Dr. Glenn Geelhoed in South Sudan several years ago in order to document his serving with 2 young surgeons-in-training in that war-torn country.

How did they first get connected? Pendragwn shares, “We met Dr. Glenn Geelhoed at his commencement ceremony at George Washington University. He was receiving one of his many advanced degrees. Glenn seemed like a fascinating character so we pulled him aside, talked with him, and inquired to see how he puts so much knowledge to use. Glenn told us about his countless mission trips to underdeveloped countries. He told us about his goal to teach and empower indigenous healthcare workers. It was then that Glenn told us about his work with Ajak and Francis and offered us three seats on his next charter flight to South Sudan.” 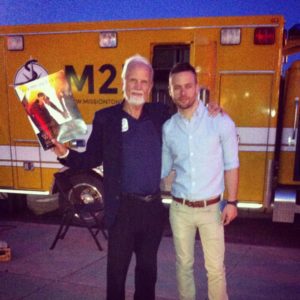 Now, this documentary is available for purchase on Amazon.com and on iTunes. If you are interested in learning more about Dr. Geelhoed, Mission to Heal, or what we mean when we speak of the “furthest peoples first” and the “bottom billion of the world,” we invite you to watch and learn from this film. It is a raw and unfiltered look at the realities that the M2H team faces in many locations – issues of civil war and a striking lack of medical expertise and resources.

Our goal is to “work ourselves out of a job” – to train local practitioners and institute a sustainable healthcare legacy.

Thank you Pendragwn for capturing that vision!

We Are the Ones: A Documentary Film by Michael Skinner and Jon Michael Shink

When tribal feuds ignite a firestorm of violence, three surgeons unite for peace.

Francis grew up with little schooling during the Sudanese Civil War. Ajak is a Lost Boy who has returned to the tribe he fled as a child. Both men are protégés of Glenn, a grizzled, but brilliant American surgeon. WE ARE THE ONES follows these Sudanese healers as they fight to prevent illness and mend wounds in the world’s newest country.

After long-running tribal divides erupt into violent raids that threaten their villages and clinics, these men embark on a journey to protect their patients and bring peace to their people.