Doing the Most With the Least – Jake in the Philippines

by Jacob Leedekerken, volunteer in the Philippines, January 2018

This was my first experience in being able to attend a M2H mission trip in the Philippines. I have had the pleasure of assisting with M2H for about a year plus prior but unfortunately schedules did not pair up until this past January. The trip greatly exceeded my expectations in terms of the ingenuity of the operations, the hospitality and appreciation of the communities as well as, of course with any trip to rural communities, the chance for adventure. 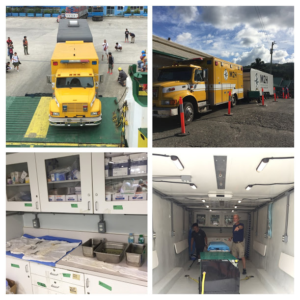 My trip started out with a roughly 48-hour trek to get from the Washington DC to the island of Marinduque, which included plane, bus, taxi, tricycle, jeepney, and ferry. A unique sense of travel, which highlights some of the difficulties for these rural communities to get the treatment they need, which often resides in the larger cities such as Manila. Along the way, though, plenty of locals foreshadowed the kindness to come with assisting me with luggage, sharing their local drinks, and even the jeepney driver going off route to drop me off right in front of our group’s lodging even though they were completely full.

We had two major stops left when I joined the team: Santa Cruz, Marinduque and Bongabong, Mindoro. The welcoming in Santa Cruz with the mayor, her administrators, local students, and others performing a ritual dance along with showering us with local coins and flowers highlighted the desire the communities had for our services.

For set up, we had assistance from the mayor’s office for best parking location. In Santa Cruz, we set up shot at the local Tourism and Business center near the community square where we were able to amass over 100 operations ranging from simple cysts to grapefruit sized lipomas and a big toe amputation. Whereas in Bongabong, we were able to set up near the local hospital complete with an ER and wards, yet staffed by one MD at the time. 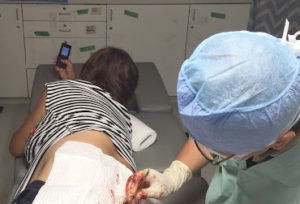 Because all operations on this trip were performed under local anesthesia, the patients were awake (and able to answer phones!) during their surgery.

Overall, the whole Philippines mission amassed 300+ operations all through the MSU! Morse surprising than that, though, is that the majority of operations were performed using surgical blades and instruments from disposable suture kits. This was due given that it was found upon opening the MSU that many of the more pricey instruments had been stolen. Yet, we were able to make due and when desperately needed, Dr. Jun from Manila, supplied some of his own surgical instruments. This in combination of using Cidex to sterilize left over sutures and instruments allowed for the stingy use of supplies we had left. All operations were performed in the MSU, under local anesthesia, which surprisingly held as evident by the numerous patients that decided to answer texts on their phones during operations (luckily far enough away from the sterile fields). 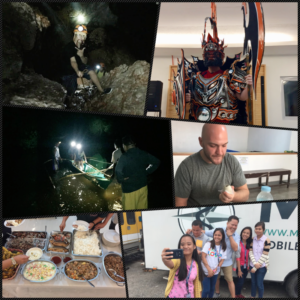 We began with just running two tables, but on our last day in Mindoro after seeing the demand for our services, we began running three tables in the MSU and were able to quickly get through the list without hiccups. On operating days after our first, we performed post-op checks for those patients who returned. It is through this flow, use/re-use of the little supplies we had, and operational capability of the MSU including its ability to traverse waters via ferry, drive through mountainous terrain, and park just about anywhere flat that really shined on the ingenuity of the operation as a whole.

Yet, the operations were not the only reason this mission trip was memorable. The group, the communities and the local activities planned made this trip one of a kind. Our group of volunteers, Joshua, Tina, Dr. Jun, Dr. Bautista, and Dr. G clearly displayed their desire to help these communities in need day in and day out throughout the trip. Many times waking up pre-dawn and finishing as the stars lit the sky. Dr. Jun truly proved his ambition to help with trips back to Manila after 12+hr days only to return the next day.

As for the communities of Santa Cruz and Bongabong, we definitely became familiar faces with plenty of kids coming up asking for photos and testing their English as well as the friendly hello’s on the pre-dawn jogs. But beyond the hospitality of the smiling faces, the mayors and their teams saw to it that our group was well taken care of with respect to lodging, activities and more importantly food. Every time I exited the MSU, it seemed as though there was a new Filipino snack or meal to try, including balut that I tried for the first time. As for the activities the mayor’s office coordinated for us, we were able to visit the famous local waterfall with local student volunteers, spelunk through a recently discovered cave crawling through tight spaces and climbing up waterfalls over a 2 km stretch, attempt night fishing with the added adventure of making a bon fire on a deserted beach and trekking through shin high mud between mangroves, and most importantly the infamous Filipino karaoke showdowns!

All in all, the Filipino MSU mission trip of 2018 was unforgettable and unique given the additive nature of the mission work, the MSU, the communities, the volunteers, the activities, the food, and most importantly the memories. I would like to thank all those that were a part of this experience and hope to make it back soon!