My trip really started with surprise and anxiousness. 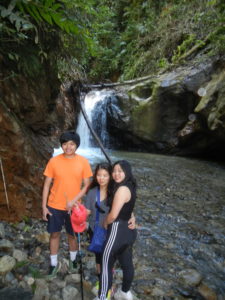 I didn’t know what to think of Dr. Geelhoed, better known as Dr. G, when I first saw him. He simply had a personality that teemed with energy, excitement, and curiosity that did not match his age. I was not quite sure what Dr. G thought of me; my personality differed from that of my sisters. My mother and sister had very high expectations of me as I was the only one who could speak spanish, and I was very nervous thinking of whether I could live up to those expectations. I was really more eager to meet the others who would accompany us on our trip. I found Colby pretty interesting – a gamer like me. He knew a lot of interesting facts and topics; I knew I could count on him.

We landed in Miami, and I was dreading yet anticipating the final stop in Ecuador. I was happy to meet Eric, but I was really relieved to see Devin and Jordan. It was reassuring to know that there were high schoolers new to mission trips just like me. I was relieved to know that there were also people on the trip who were going through the same things as I was. It didn’t feel like it, but my sister would be heading for college in August and I would really need somebody to turn to.

I really wondered about how we would be similar and how we would be different. I was interested to hear what their life in San Antonio was like, as I had not ever really known communities outside of Virginia. I was happy to know that even if I did not enjoy the mission trip, I would at least have a few people that were really like me to talk to.

When I first arrived in Ecuador, I was both curious and scared. I had not looked into Ecuador very much, but my perception of Ecuador as poor seemed to be correct. Even though we were in one of the major cities, Guayacuil was not very prosperous like many of the other major cities I had been to.I was very interested to hear Dr. G’s stories, and hoped we had time to hear some more. 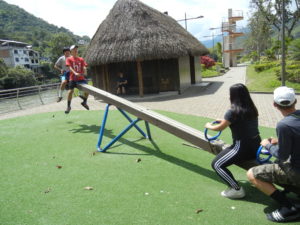 I didn’t know what volunteering would be like, but my mother and sister’s volunteering experience in Mongolia didn’t leave me eager for this trip. Admittedly, I didn’t view the trip with the same optimism my mother did. When we finally arrived at the hotel that would take us to the village I wasn’t particularly thrilled about volunteering. Dr. G warning us about the landmines wasn’t particularly reassuring either. I expected it to be both tedious and challenging – I thought that I would be relegated to the vitals, and even than I would be met with some resistance for not being a worker like I had been in my mom’s office.

In our first few days before Shuar Village, we got to explore the city. I found the vibrant culture to be quite interesting

and a new look into what life was like. I had many predispositions of South America that I was quickly finding out was false.

I also began to learn interesting facts about fellow volunteers that I would have never suspected; Eric and I both shared interests in investing and sneakers. Colby and I bonded over gaming and Devin, Jordan and I shared stories about life in our cities and high schools as well as our favorite sports teams. We even had a few jokes that we made like we were friends for years, such as Cool Cat, doing the thumbs up, and the Marilyn Monroe song. 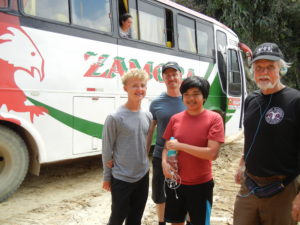 Admittedly, I viewed the days of volunteering like I did a particularly challenging test. I didn’t like the idea of an “actual vacation” being replaced with volunteering. When I heard villages, I imagined rural areas like those that you would read about in the news article explaining surviving hunter – gatherer societies in the Amazon. I was surprised to see that it was much like a modern town – amenities such as toilets and the internet were present. In fact, the more I thought about it the more I felt that it was quite similar to what life in a neighborhood would be like.

I noticed how much closer people were than in a typical neighborhood – the village received little, if any outside help. I also noticed how happy the children were even with a small toy as they would never have the luxuries many in first world countries would have. The village was in fact full of happy and positive people which made me happy. My sister was even able to start friendships with a few villagers her age and she still keeps in touch with them on Facebook. We also played games with the children, which everybody enjoyed playing and even just watching.

It truly feels like a small world when you can bond with people who live thousands of miles away from you. I also enjoyed meeting more new people there, such as the medical students. Of course, my sister wanted to hear more from them since she would very soon be going through the same experiences they were. I was quite happy to volunteer since I found out that I would be doing far more than just vitals. I would help my mother and others with translations for treating patients, and I felt fulfilled.

Volunteering in Shuar village gave me a new perspective in volunteering in different areas. It showed me not to think negatively about traveling to new and unfamiliar destinations, as they could be familiar in comforting ways and surprising in interesting ways. It also gave me a new perspective on what life could be like outside the representations and stereotypes by media and those around me. I found the trip very interesting and hope I can do more.