Okay, here we go. This trip to Ecuador has been extremely fun, rewarding, and eye-opening for me. I was able to do and see so many new things and got to meet many new people.

At the beginning, after staying the night in Guayaquil, we went up into the Andes mountains, into the town of Cuenca.While the trip up into it took a while, Cuenca was a really nice town with some cool architecture and beautiful rivers. (We also had a really nice hotel) 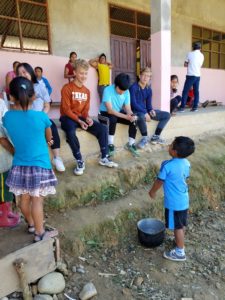 Later, we rented a large bus and headed into the rainforest to go to Shaime, the town we would be doing our mission to the Shuar people in. This was also a very long drive, but it was cool to see the landslides that stopped us once or twice because of the lack of topsoil in this unique ecosystem.

I was able to put my newly learned skills into action so that I could help the group work more efficiently, but eventually the amount of work that I could do began to thin, so me and the rest of the teens decided to hang out with the village kids for the rest of the night. It was really fun and interesting to see what they did for fun, as they were mostly unable to access small (first world) things like computer games or big things like amusement parks. (They did actually have a small computer lab but did not use it for that much) It was really cool because they didn’t rely on things to have fun, but on themselves and each other.

While we might not really have been able to communicate with each other through language, as most spoke Spanish, we were able to still understand each other through tone and signals that let us communicate and connect with each other. The next day, I had figured that all out and upon arrival to the village, I headed straightaway to play with the kids. We created our own game of throwing a golf ball into a bucket, which might sound boring, but seemed intriguingly exciting for the village kids as we would give them claps and a fist-bump each time they made the ball in the bucket. Then, we went off to their mini playground in which they had a few seesaws, swings, and two slides. They seemed like they loved it, but soon enough, I had to go into the mobile surgical unit to watch an operation. 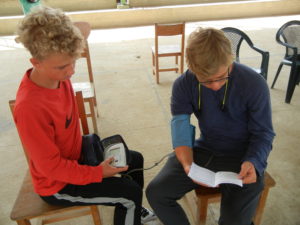 I got dressed in some scrubs and headed in to the the operating room. The patient needed a node (not entirely sure of the lingo) removed from inside his neck, and also needed a mole removed above his forehead. It was actually a much shorter procedure than I would have imagined, but still helped me learn how things went down in a surgical procedure. However, it was a little icky, but that’s beside the point.

After watching the procedure, we handed out some toy cars that had been brought on the trip to the kiddos, and they started to play around with them, even go as far as to make Jordan hunt for them after they hid them. Sadly, all good things come to an end, so we said our goodbyes and left the village later in the day, but that wouldn’t be the end of it. Once we arrived back at the hotel, we ate a delicious dinner and had live music played for us by one of the Cinterandes staff, and even sent some Chinese lanterns into the beautiful night sky of the Southern Hemisphere. That capped off the mission, which was an amazing chance to see how these people lived and how we should not take our first world commodities for granted.

In addition, it helped me learn new things in relation to the medical field and gave me a chance to communicate across languages to an entirely new group of people. The next day, we headed out of the village, but not without taking a quick boat ride on the Nangaritza river, where we saw some cool fossils of shells and some waterfalls and canyons. We left soon after to our next destination, Copalinga Lodge. The lodge was really nice with great breakfasts and dinners and even hot showers! This area was made for adventure, and we sure got plenty of it!

The day we got there, we went down to the Bombascuro river, which was within walking distance from the lodge. It was very cold, but I jumped in along with no one else, and it was totally worth it. The next day we had another adventure, into Podocarpus National Park, which was also very near Copalinga. Our first trail (actually second cause there was a trail to get into the park) was to a small waterfall before our big payoff. We took another trail for about 10 minutes and stumbled upon a huge waterfall with two levels, called La Cascada Poderosa. The water there was super cold as well, but we went in nonetheless for a few minutes (maybe seconds) and then warmed up in the sun for about twenty more. After that we went through another trail then headed back to Copalinga and eventually back down to a different spot in the river. This one was more popular with the locals, and also with our group, as Eric and Leina jumped in along with me to the cold water. We hung out there for a while then went back for dinner and watched lightning bugs. It was a great day of adventure, and I had yet another in store for me on the next. 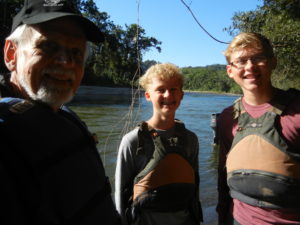 First thing in the morning, we went up on the trails on the Copalinga property to take a grand loop. We stopped many times on that loop to see, learn about, and take photos of many different animals and plants, because in the Amazon, it’s not about the destination but the journey.

In the afternoon we took another hike, this time into unknown territory. Immediately on this walk we stumbled upon leaf-cutter ants, which I had learned could lift about 25 times their weight and that their total biomass was over 4 times that of all vertebrates. We also crossed many more waterfalls on this hike, and walked over three landslides on this unmaintained trail that was slowly becoming draped in darkness. There were a few times when we wanted to turn back because it would get dark on us (and you don’t want to be stuck in the rainforest at dark), but I soon learned that any plan is better than no plan, no matter how bad that plan is. Order is always better than chaos.

And at that point I saw our escape across the river and into the easy trails of the national park. After crossing that next bridge we headed back toward the lodge with only the light of a few phone flashlights for about two miles. Then, as we exited the national park territory, we saw two lights off in the distance! They were the headlights of the lodge owner, Kathryn’s, car! So we safely got back to our nice dinner only 30 minutes late. We made it back through determination and by keeping our wits instead of falling into anarchy out of fear, which is a useful lesson in life.

The next day, we had less excitement, but still had fun. We went into the town close to our lodge, called Zamora, and went into the farmers market, walked the river, and saw a festival in the town square. There, I learned a lot about Ecuadorian culture and all its richness. In the afternoon, we just hung out and rested out of tiredness from our huge day before, and packed to get ready to leave. We left Copalinga in the morning, but not without the memories of epic adventures and knowledge of new trivia about the rainforest and the culture in it. I will remember all these lessons and memories of this great trip that has really been fun, rewarding, and eye-opening. Thanks for listening!