In this excerpt from Dr. Glenn Geelhoed’s journals in the Philippines in February 2017, he teaches good surgery techniques to local workers in the area hospital. Dr. Geelhoed encourages his students to not just perform surgery, but to perform each surgery well, with proper care for the patient. 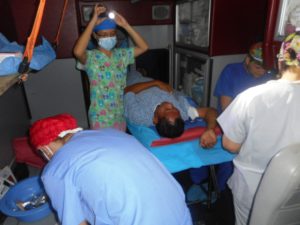 Today was the long-awaited first-time participation of the anesthesiologist who has come to us from Manila.

Since she was coming, we would be able to commence major operations under general anesthesia such as the thyroidectomies and the submandibular tumor and parotid gland tumors sent from Marinduque to our venue here to get general anesthesia.

There was a long time setting up the MSU trailer. I went to cover the three-bed hospital operating room to see a number of first-time independent operators doing the kinds of cases that seemed to be steep learning curves.

I went over the basics of the way one injects anesthesia so as not to give the patient more than one needle stick. I told them to go through skin on the incisions and not to scratch their way down to the lesion. And to be conscious that it is the patient and not the lump we are treating, so concentrate not on the lump but on the patients and their tissues to be preserved. “We are dissecting the patient away from the lump and not the reverse.”

I tried to deliver as many surgical pearls as a full residency might require after these basics, but it was not likely that they could be turned out as minor surgeons after a walkthrough in a single series of cases. 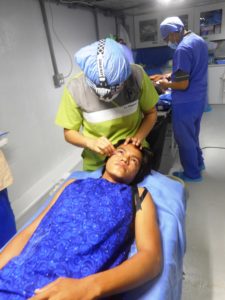 I told them it is often best to use the side of the blade in making the sharp knife a blunt dissector, tearing tissues that are not damaged in separating from, for example, nerves and blood vessels which are not injured in stretching the tissues from the ones to be preserved. And “Never squeeze the skin,” only hooking it with the toothed forceps like a skin hook.

All these maneuvers are not self-evident, and some are counterintuitive. I remember one man, a distinct non-surgeon, focusing on the knot of the suture he was trying to tie and so concerned about the technique of suture he was tying as if it were on a bedpost, ignoring the pulling of the vessel it was meant to be useful for mending.

So I tried to give a bit of teaching on surgical technique to a group of students and assistants who had never in their lives operated before. Given this unusual circumstance, they were being authorized not just to “Do It” but to “Do It Well.”